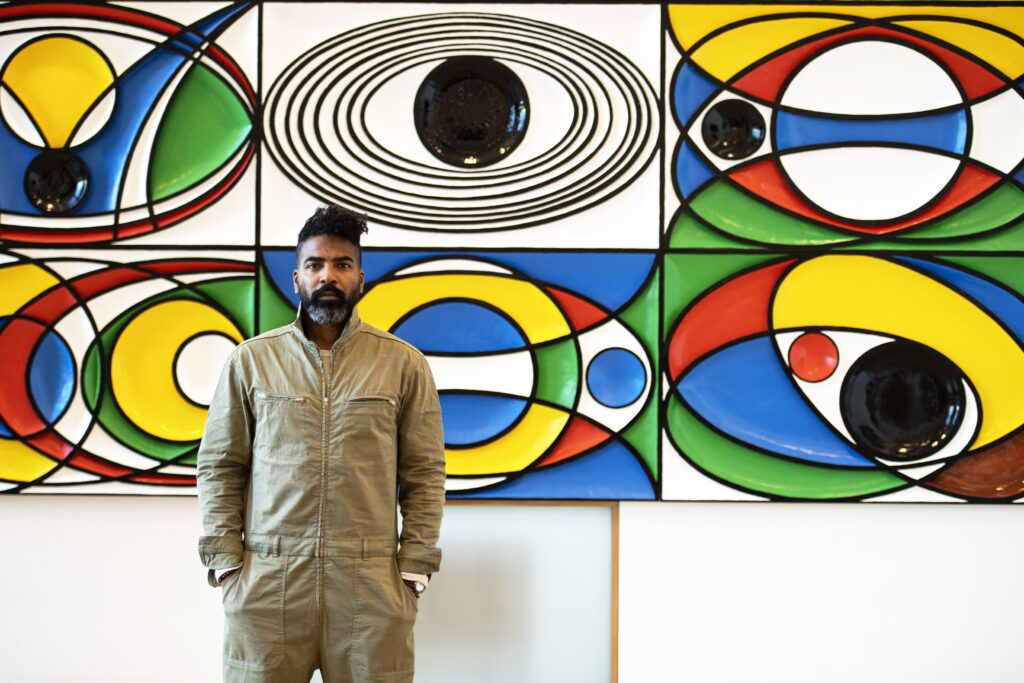 Graeme Mortimer Evelyn is a multi-media visual artist, musician, and curator – whose varied body of work comments on cultural social identity, politics, and language. He describes these narratives forming – “when fragments of relation, memory, society, identity, and modernity, which seem disparate at first, come together to form a whole”.  His works have been displayed and collected in Princeton University Center for African American Studies NJ, Cornell University NY, Kensington Palace, The Royal Commonwealth Society, Museum in Docklands, Gloucester Cathedral, Watershed, and M-Shed Bristol.

Evelyn has developed a reputation for creating work that is situated in municipal buildings, sites of memory and places of worship that subvert these settings and philosophies. His intention is that his art acts as a catalyst – attracting new audiences to seek alternative dialogues and challenging questions to enable the democracy of public space. His subversion of the institution does not stop there, as his works often reflect that ‘institution” denotes systems, memorial, edifice, myth, belief, and popular opinion.

Many of the commissioned project work engages with contested histories and heritage, which has often required detailed archival research and an acute sensitivity to collective social issues and ideas. This process is challenging and thought-provoking for both artist and audience, causing to question the essence of what brings people into a conversation with a work of contemporary art.

His use of detailed in-depth subject research creates the framework and give context to his experimental use of varied and diverse mediums, such as the 55min video essay The Two Coins: Meditations on Trade  (2007). This poignant, factual and objective work was filmed staging imagined historical reenactments within UNESCO heritage sites and locations in Ghana, Mali, Malawi, and the UK, documenting the dormant history of the Trans – Atlantic Slave Trade as silent meditation.

In 2009, Evelyn was commissioned by M-shed (Museum of Bristol) to subvert historical record. The result of extensive research and an old Chinese gambling table – the museum acquired the large painted relief sculpture, Reading the Riot (Act), a permanent work on display for their contemporary art collection. It is an uncompromising and challenging statement on the long history of British public dissent. Unveiled in 2011; the year of unprecedented rioting in London, Europe, and the Middle East Reading the Riot (Act) became strangely prophetic

In 2011, Evelyn was Artist-in-Residence at St. Stephen’s Church Bristol, commissioned to create a large scale permanent contemporary altarpiece, the Reconciliation Reredos.  Set within one of the oldest churches in Bristol, historically significant as the harbour church that blessed every merchant slave vessel before their voyage; the Reconciliation Reredos is a contemporary artwork of universal reconciliation, that responds to the church’s past, reflects the voices of the city today while representing the potential of the future. The work has established Evelyn as the first-ever British Jamaican Artist to complete such a commission in Europe.

He also presented the exclusive solo exhibition Out of Many, One at the Jamaica High Commission during the London2012 Olympics and Jamaica 50 and was the guest curator of contemporary Jamaican film for Afrika Eye 2012 International Film Festival. In 2013/14, Evelyn created the critically acclaimed site-specific installation Call and Responses – The Odyssey of the Moor  – a contemporary response to John Van Nost’s Bust of a Moor (1688) commissioned by Historic Royal Palaces and The Royal Collection Trust – exhibited within the Queens State apartments at Kensington Palace.

In Feb 2015 Evelyn was CoLab Festival Artist in Residence at Trinity Laban Conservatoire for Music & Dance directing an improvisational fusion of automatic drawing with the conservatoires contemporary dance and jazz / classical music students. Recently, Evelyn co-curated the major landmark UK exhibition Jamaican Pulse – Art and Politics from Jamaica and the Diaspora – commissioned by The Royal West of England Academy for June 25 – Sept 11 2016, in partnership with the Jamaican High Commission, National Gallery of Jamaica and The Bluecoat Liverpool supported by Arts Council England.

Evelyn has contributed to discussions on the role of public art for Museum in Docklands London Festival of Architecture, Virtual Migrants series at the Arnolfini, the Caribbean Curatorship and National Identity conference in Bridgetown, Barbados and for the International Curators Forum / Asia Culture Centre symposium Curating the International Diaspora for the 2016 Gwangju Biennale, South Korea.

His recently completed public artwork entitled The Eternal Engine, a major Diocese of London commission unveiled in November 2017 for the first church built in the capital in over 50 years  (St Francis at the Engine Room in Tottenham) is the largest permanent contemporary altarpiece in Europe and was shortlisted for the prestigious A+C Art Award 2019. Since Reconciliation Reredos Heritage Fund commission for Bristol’s St Stephen’s Church in 2011, Graeme Mortimer Evelyn remains the only British / Caribbean heritage artist to complete two such unique permanent public art legacy works in Europe.

Evelyn currently works in his newly constructed and landscaped artist garden studio in South London, continuing to develop his varied and innovative body of works exploring automatic experimental drawing and sculpture informed by his synaesthesia reaction to sound, music and audio and how these responses relate to contemporary religious and secular belief structures.

In December 2022, he will be delivering a lecture and public conversation for students at King’s College London as part of a series titled ‘Inside London: Art and the Sacred’ and will also be one of the forthcoming panel judges for the Edinburgh based, John Byrne Award for 2022/23. His observational essays on Contemporary Art and Culture are published with ArtBible online.

APR 09/10    The Stations of the Cross Saint Stephen’s Church, Bristol

OCT 2008     The Weird and Wonderful Lost and Found PART I Severnshed Restaurant, Bristol

MAR 2008     The Narratives of the Journey The George Gallery, Newnham on Severn

FEB 06/07    The Stations of the Cross Gloucester Cathedral

JAN 1998      I Work in this Building The Greenhouse Restaurant, Bristol

DEC 2007    The Pierian Centre Funding for The Two Coins

Band member of groundbreaking and influential post-punk-electro-hip-pop-experimental group, OIL EXPERTS. The group  was instrumental in the emergence of a new Bristol underground avant garde sound during a very vibrant artistic and musical period. This new wave cultural movement was spearheaded by arriving artists/musicians relocated to Bristol in the wake of Massive Attack, Tricky and Portishead as an acknowledgment of, as well as a reaction against, the mainstream identification of the “Bristol Sound”.

Commissioned by the Dean of Gloucester Cathedral to create the Stations of the Cross for the Cathedral Cloisters for Lent 2006.

Requested for re exhibition Lent 2007.

Embarked on detailed in-depth subject research that surround monuments erected in memory of prominent 18th Century British slave traders for framework and context to examine their dormant history and legacies as silent meditation. Written, produced and directed the 55min silent video, The Two Coins: Meditations on Trade as a response using locations in Ghana, Mali, Malawi and UK, back dropped by UNESCO World Heritage sites, Festivals and Museums, juxtaposed by historical fact without myth or prejudice, from historians such as Hugh Thomas, Marcus Rediker and Madge Dresser.

Panelist A Role for Public Art for London Festival of Architecture Museum in Docklands London on the theme of Public Art and Social Debate.

Commissioned by M-Shed (Museum of Bristol) for their permanent collection of contemporary art as a response to subversion of historical record Reading the Riot (Act), is on permanent display. It is an uncompromising and challenging statement on the long history of British public dissent. Unveiled in 2011 during a year rioting in London, Europe and the Middle East.

Panelist Networks that Work for You for the Caribbean Curatorship and National Identity conference in Bridgetown, Barbados.

Artist-in-Residence at St. Stephen’s Church Bristol, commissioned to install the large scale permanent contemporary altarpiece, entitled the Reconciliation Reredos for one of the oldest churches in the medieval quarter of Bristol UK. St Stephen’s has global historical significance as the harbour church that blessed every merchant slave vessel before embarking on their voyages during the Transatlantic Slave Trade. The Reconciliation Reredos is the first contemporary altarpiece to be installed permanently within a sacred medieval space in Europe by a British Caribbean artist.

Granted exclusive access to The Royal Library at Windsor Castle catalogues of Leonardo da Vinci’s preparatory Drawings of The Last Supper and his studies of Anatomy, Divinity and the Grotesque.

Commissioned by Historic Royal Palaces and The Royal Collection Trust to create a contemporary site-specific installation as response to the earliest recorded object within Kensington Palace – John Van Nost’s Bust of a Moor (1688). The critically acclaimed Call and Responses – The Odyssey of the Moor   was exhibited within the Queens State apartments at Kensington Palace. The Odyssey of the Moor is believed to be the first time the Royal Collection has allowed one of its top 100 objects within its vast inventory to be used within a contemporary art installation.

Co Curator Jamaican Pulse – Art and Politics from Jamaica and the Diaspora for The Royal West of England Academy – a major international group-show exhibition of Jamaican and Jamaican-Diaspora artists of international acclaim, delivered in partnership with the Jamaican High Commission, National Gallery of Jamaica and The Bluecoat Liverpool supported by Arts Council England National Funding and the Art Fund.

Relational Ethics and Aesthetics panel discussion for the International Curator Forum / Asia Culture Centre symposium, Curating the International Diaspora for the 2016 Gwangju Biennale, South Korea. Presented current artist practice and addressed how Diaspora artists can radically re-imagine history and meaning of the image and the relationship to a ‘local’ or ‘tourist’ audience.

Commissioned as Artist in Residence by the London Diocese to create the permanent large scale contemporary Reredos (altarpiece) The Eternal Engine for their first new church built in the capital for over 40 years situated Tottenham Hale, St Francis at the Engine Room unveiled November 2017. The Eternal Engine is believed to be the largest contemporary altarpiece in the United Kingdom and Europe.

Invited by the Governers of Chelsea Academy as Summer Artist in Residence, in response to the lack of UK Govt Education funding allocated to young people particularly within London innercity schools.  A number of works inspired were created in the month using the art class schoolroom. One of which, entitled Beautiful People Are Not Always Good, But Good People Are Always Beautiful (123cm x 148cm collage, Acrylic, Paper) I have chosen to donate to the academy to create more funding for their Art, Music and Drama department materials needed for students. Contact Chelsea Academy for further details. 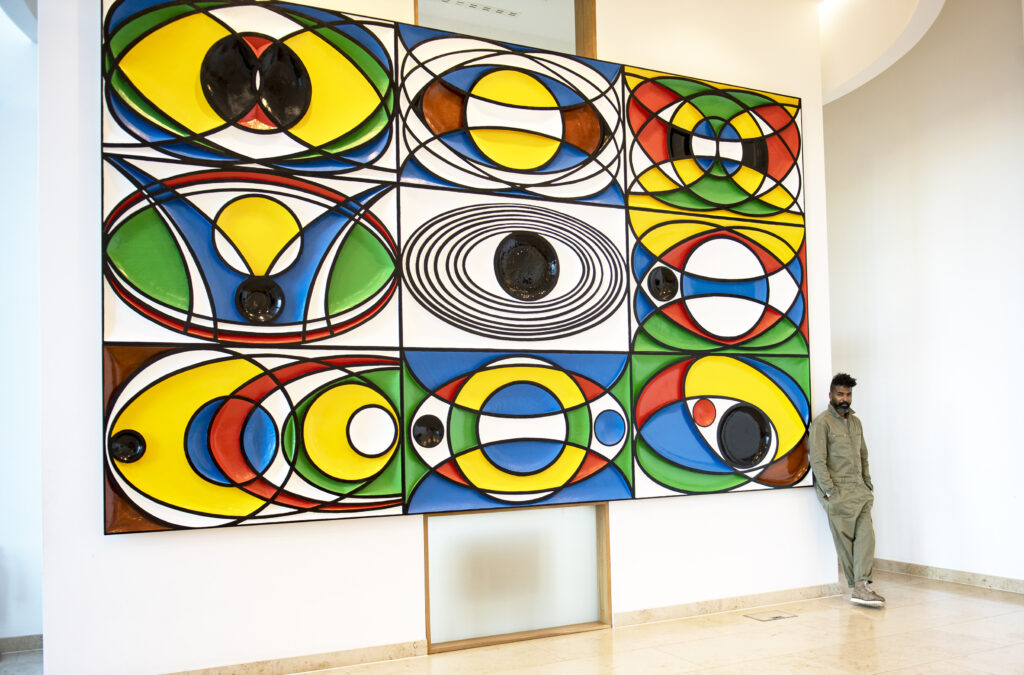